Any 'Potted Roses' ordered from 30th March will be dispatched from Thursday 8th April due to the Bank Holiday weekend. 'Potted Gift Roses' will still be delivered as requested. Standard delivery is not a guaranteed service.

A stunning shrub rose new to our collections, and named in 2010 by its breeder, Peter Beales, for Sir Terry Wogan, who sadly passed away last month. 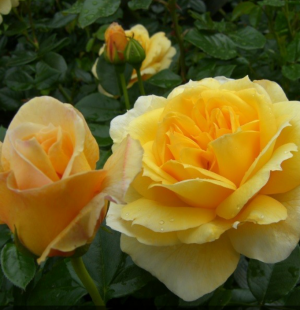 Sir Michael Terence "Terry" Wogan, was a radio and television broadcaster from Ireland who worked for the BBC for most of his career. Before he retired from his BBC Radio 2 weekday breakfast programme 'Wake Up to Wogan' in 2009, it had eight million regular listeners, making him the most listened-to radio broadcaster in Europe.

As his radio show was considered to attract older listeners, Wogan jokingly referred to his fans as "TOGs", standing for "Terry's Old Geezers" or "Terry's Old Gals", whilst "TYGs" were "Terry's Young Geezers/Gals" who he joked were forced to listen to him because of their parents' choice of radio station. Wogan was referred to as "The Togmeister" on his own programme by himself and members of his production team, and he referred to the podcast of his show as a 'togcast' in keeping with the acronyms described above.

Wogan was often referred to as a national treasure in his time, and his name will now be forever immortalised in thousands of gardens across the country by being attached to this absolutely stunning rose.

Our Simple Guide
to Rose Care